The Democratic Party has the darkest, most ugly history imaginable. No other political party in American history comes close to matching the sheer magnitude of their horrendous behavior. They try to keep their dirty secrets under wraps, but their true repulsive legacies are starting to leak through many cracks.

The Democratic Party’s ugly tradition started in 1829, with the election of Andrew Jackson. He defended the morality of slavery and racism, and was infamous for beating his slaves. Jackson instigated the removal of Native Americans from their tribal lands east of the Mississippi River. He is responsible for three trail-of-tears forced marches, sparking a genocide that killed up to 8,500 Native Americans.

Originally, one of the poorest men in America, Jackson became one of the richest men in the world after he made a fortune secretly buying cheap Indian land that his administration had taken under his Indian Removal Act of 1830. He also profited by instituting the politically corrupt “spoils system,” which booted out experienced public servants to be replaced by Jackson’s campaign donors and workers.

By the 1830s, slavery was dying. One of the biggest slave states, Virginia, almost banned slavery in 1832. Southerners were in a panic. Andrew Jackson’s Vice President, John C. Calhoun, came to the rescue to intellectually defend slavery and racism. He and other pro-slavery Democrats started to spread the monstrous lie that black slaves had it far better than the free labor in the industrial North. Slaves now were seen as children who required motherly help.

Calhoun also believed that the “superior” man brought order; the “inferior” man instigated chaos. A war hawk in the War of 1812, he and his disciples rejected the Founder’s view of natural rights for all men, equality at birth, and free-market capitalism. Calhoun did not consider humans as autonomous individuals, but believed that “instead of being born free and equal, [people] are born subject, not only to parental authority, but to the laws and institutions of the country…” Not surprisingly, Calhoun was the leading spokesperson for the “slavery as a positive good” movement, arguing that slavery is “instead of an evil, a good—a positive good.” He also defended slavery under paternalism and social welfare principles, where unfit and enslaved laborers would be provided food, shelter, clothes, and old age benefits.

The conflict between liberty and slavery lead Democratic Party politicians to instigate a violent insurrection. They created the Confederate States of America, fired on Fort Sumter, and instigated the Civil War. After losing the war, the defeated Democrat southerners organized the Ku Klux Klan, assassinating black leaders, white abolitionists, and Union officers. President Andrew Johnson, a Democrat, refused to rein in the KKK terrorists. General Grant, a Republican, ran for President and quickly destroyed the KKK.

A half-century after the Civil War, many Democrats became progressive reformers who ushered in “modern-social liberalism.” The Democrat-elected President Woodrow Wilson was both a progressive reformer and modern liberal who was also an outright racist, segregationist, and anglophile, who pushed for restrictive and discriminatory immigration laws. Wilson praised the wildly racist 1915 silent film, Birth of a Nation Birth. He defended segregation, telling a delegation of black leaders that “Segregation is not a humiliation but a benefit.” He segregated most federal departments, and fired most black postal workers. He regarded the Ku Klux Klan as a “great” movement. He referred to blacks as an “ignorant and inferior race.” Impressed with socialism, Wilson engaged in imperialism with “gunboat diplomacy”, invading other nations to make regime changes. He suppressed anti-war dissent during World War I, arresting and prosecuting thousands of anti-war protesters, engaging in warrantless arrests and holding detainees without trial.

The next Democratic Party president was Franklin D. Roosevelt, who defended collectivism, socialism, and fascism. He sent his closest Brain Trust adviser, Rexford Guy, to Fascist Italy. Guy was impressed with Mussolini’s fascism, calling it “the cleanest, neatest, most efficiently operating piece of social machinery I’ve ever seen.” He brought back books by Giovanni Gentile, the philosopher of Fascism, and encouraged FDR’s staff to emulate fascist economics. FDR did exactly that with the National Recovery Act (NRA) which promoted cartels, monopolies, government interventionism, and higher prices.

FDR also confined 120,000 citizens of Japanese ancestry to concentration camps. FDR was not sympathetic towards Asians or Jews, believing that biological characteristics prevented them from becoming loyal Americans.  As for American blacks, FDR displayed his racism by refusing to invite the US black 1936 Olympic team to the White House, including four-gold-medal-winner Jesse Owens. Every white Olympian was invited. Enraged, Jesse proclaimed, “Hitler didn’t snub me; it was our president who snubbed me. The president didn’t even send a telegram.”

Furthermore, after the Civil War, it was the Democrats, mostly in the South, who instigated segregation, Jim Crow laws, and voter suppression. They were responsible for the lynching of thousands of blacks, burning down whole black townships, and passing laws to deny blacks the right to own guns. In one of their last desperate attempts to retain white supremacy, many U.S. Democrat senators filibustered the 1964 Civil Rights Act. They failed.

In 2010, Joe Biden eulogized Sen. Robert Byrd at his funeral, referring to him as his “mentor.” But Sen. Byrd was a segregationist and an organizer for a KKK chapter in West Virginia. Apparently, President Biden does not fall far from the racist tree. He once labeled desegregation as a “racial jungle.”

It is truly difficult to explain why any African-American would support their former taskmasters. The Democrats’ abusive and ugly history of racism, white supremacy, tribalism, socialism, and fascism should have led to their party’s demise decades ago. It is time to proceed with Democrats’ final burial and let them rest with ignominy.

L.K. Samuels is the author of Killing History: The False Left-Right Political Spectrum. His website is KillingHistory.net 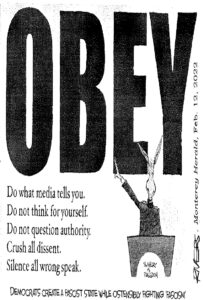